To all the supporters of Tibet,

I, Lungtok, would like to announce my completion of tenure as the Representative of His Holiness the Dalai Lama for Japan and East Asia in May 2020, and that I have been transferred the Department of Security of the Central Tibetan Administration in Dharamsala, India.

It is my great honor to work with people who have supported the just cause of Tibet in Japan during the past 6 years of my tenure as the Representative of His Holiness the Dalai Lama. I will never forget in my life the bond and kindness of all of you who have genuine respect for His Holiness the Dalai Lama, and understanding the truth and critical situation of the issue of Tibet.

Especially, without the invaluable support and cooperation of the volunteers, many of the important works such as the visit of His Holiness the Dalai Lama to Japan, Japanese translations of Tibet-related documents, the maintenance of the website and publication of office journal, could not have been smoothly carried out. Thus, I am filled with immense gratitude for your kind support.

I first came to Japan in 1980 as an exchange student of Naritasan Shinshoji Temple. As part of my specialized field of study, I learned and practiced Judo and Karate, and acquired Black Belt in both fields. By persisting in the art martial arts, I was able to learn different aspects of Japanese culture.

Later, I joined Takushoku University in 1988 and obtained under graduate and master’s degree. Following the graduation, I returned to India and worked at the Department of Security as security officer of His Holiness the Dalai Lama during visits to different parts of India from 1996-2002. During that time, I mentored security officers with judo and karate as self-defense. Subsequently, Judo center was established in India with the support of Teikoku Security Company. With the latest style 48 tatami mat for the Judo center was received from Japan, the first genuine Japanese Judo center came up in India. That Judo Centre is still in operation today.

While working in Dharamsala, I had the opportunity to be part of security team in the entourage of His Holiness the Dalai Lama during the latter’s visit to Japan in 1998 and 2000. As a Tibetan, I feel utmost joy and happiness to get such a precious opportunity.

In 2002, I was transferred to the Liaison Office of His Holiness the Dalai Lama in Japan and worked as Cultural information officer under three successive representatives until 2013.

And in June 2014, I was appointed as the Representative of His Holiness the Dalai Lama (NPO Tibet House Japan). I was filled with a very heavy responsibility and anxiety when I first took the post. However, when I look back, the strength of all the supporters has made each day of the last 6 years very meaningful and productive. For that, I am thanking from the bottom of my heart. Especially, His Holiness the Dalai Lama’s visits to Japan would never be successful without the cooperation of all the supporters and volunteers. It is a matter of great happiness for me as a Tibetan to have His Holiness the Dalai Lama visit Japan 15 times when I was staff of the Tibet House, 4 times during my tenure as the Representative and 12 times via transit.

In the political field, we successfully organized visit by Dr. Lobsang Sangay, the president (Sikyong) of the Central Tibetan Administration, to Japan 4 times from 2016 to 2019 and create awareness on the current situation inside and outside Tibet. Especially, in December 2016, All Party Japanese Parliamentary Support Group for Tibet was established as a sign of genuine concern and understanding for the critical situation of Tibet. It has bipartisan support of 92 members of parliament. ‘‘Tibet’s culture and Buddhist religion has a great potential to bring peace and non-violence to the world’’, say supporters as a reason for supporting the issue of Tibet.

In addition to arranging visits of His Holiness the Dalai Lama and Sikyong Dr. Lobsang Sangay to Japan, one of my important works is concerning the financial aspect. Under the blessings of Holiness the Dalai Lama and guidance of the Central Tibetan Administration, we feel glad to be able to purchase the office building and secure residential houses for the three staff members. Until then, we had to arrange everything whenever a staff is transferred to Japan. And also, we had to dispose everything whenever a staff in Japan gets transferred back to India. All these troubles came to an end because all the necessary appliances and needs have been permanently installed in each home. As a result, the incoming Representative and staff members will be free of worry and can focus attention on their work.

As the residence of the Representative’s residence is located at about 5-minute walk from the office, there is no need for the staff to commute every day. It is matter of great joy that the dream that I had during the last years as the Representative has been realized and for that I would like to thank all the members of the Tibet House for their warm support and cooperation.

Moreover, there has been progress in the field of education during my tenure. Today, Tibetan students selected by the Department of Education of the Central Tibetan Administration are studying in two universities in Japan. After graduation, they will take different paths such as working in Japan, returning to India to become staff of the Central Tibetan Administration and becoming a bridge between Tibetan and Japanese Buddhism. Particularly, we are extremely grateful to the two universities who have been accepting every year 2 students and 3 students respectively.

Tibetans inside Tibet are constantly living under the repression and surveillance of the Chinese government. Particularly in recent years, the repressive surveillance measures have been strictly strengthened and the detention of Tibetans is on the rise. Those Tibetans who wield influence over the society are exposed to dangers as they are suddenly taken away by police anytime, subjected to interrogation and forced to accept false charges.

‘‘Tibet has achieved development and prosperity after getting liberated by China. Tibetans are living in peace and happiness)’’, says the Chinese government.

However, the reality is that more than 150 Tibetans have set themselves on fire in Tibet till date since the self-immolation protest by Tibetan broke out in February 2009. Out of them, 130 have died. Nearly half of those who burned themselves are in the age of 15 – 20. If what China claims is true, why young Tibetans inside Tibet are burning themselves in protest?

Similar to its tactics of hiding the cause of novel Coronavirus pandemic originated from Wuhan, the Chinese government will desperately employ falsehood and distortion to block the truth behind the issue of Tibet.

However, we Tibetans will continue to convey the truth of the issue of Tibet as long as the Tibetan people remain alive. We firmly believe that the day of our return to our homeland will dawn, and that we resolve in our effort to preserve the value of our Buddhist religion and culture.

We appeal to the people of Japan to continue to offer your warm support and cooperation to Tibetans suffering under China’s repressive rule.

It is deeply regretted that the ceremony to welcome the new Representative could not be organized as the Coronavirus pandemic continues to spread. As a result, I feel deep regret for not being able to directly convey my heartfelt gratitude to the supporters of the Tibet House. I express my apology for this discourtesy.

We feel happy to welcome the new Representative, Mr. Tsewang Gyalpo Arya. Mr. Arya is a senior official of the Central Tibetan Administration and he has the experience of working as a staff of the Liaison Office of His Holiness the Dalai Lama in Tokyo and also well-informed about Tibet.

We would like to request for your continued warm support and cooperation to the new Representative.

Last but not the least, I would like to express our sincere thanks to His Holiness the Dalai Lama, the government, organizations and people of Japan for their unwavering support for efforts in resolving the issue of Tibet.

To the people of Japan, thank you. I will return to India carrying lots of good memories that we nurtured during the last many years.

Liaison Office of His Holiness the Dalai Lama
Representative Lungtok 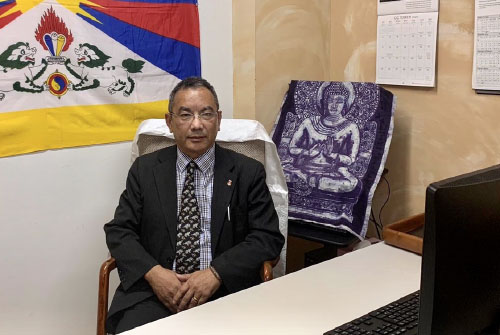