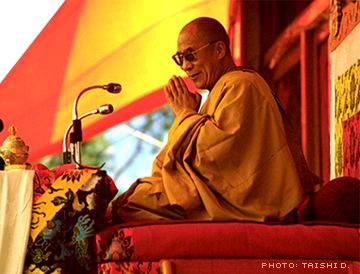 The basic aim of my explanation is to show that by nature we are compassionate, that compassion is something very necessary and something that we can develop. It is important to know the exact meaning of compassion. The Buddhist interpretation is that genuine compassion is based on a clear acceptance or recognition that others, like oneself, want happiness and have the right to overcome suffering. On that basis one develops some kind of concern about the welfare of others, irrespective of their attitude to oneself. That is compassion.

The essence of Buddha’s teachings is to abandon the ego, which is the cause of suffering, to cultivate the altruistic mind, which is the cause of happiness, and to live a life based on compassion.
In order to follow these teachings, we must analyze our states of mind, observe events from various viewpoints, and generate compassion from our hearts.
Attending His Holiness the Dalai Lama’s general lectures for youth, and listening to his sermons and discussions with scientists will encourage us to overcome everyday problems and worries and to lead positive lives.

For the first time in Japan, His Holiness the Dalai Lama will address the younger generation with a warm and gentle message that will help them have hope in a modern era that lacks humaneness.

4,500 people will be invited to this lecture by lottery.
Application cards should be postmarked on or before October 22.

In order to achieve the great power of compassion, we must train ourselves to generate compassion from deep within our hearts. In this valuable lecture, His Holiness the Dalai Lama will guide us through the profoundness of the “Eight Verses on Mind Training”, an esoteric doctrine of Buddha, and make it easy to understand by giving us specific examples.

How are physics and biotechnology viewpoints, the Buddha’s esoteric teachings, and macro/micro science opinions linked? His Holiness the Dalai Lama and a group of prominent scientists will analyze various topics and scientifically prove the power of compassion.

Seats on the second and third floors (Unreserved seats)：Ticket for two lectures 8,000 yen

Ticket will be available at the hall on the day of the event.

Dr. Koshiba was born in 1926, and graduated from the Physics Department of the University of Tokyo. He obtained his PH.D from the University of Rochester graduate school, and is at present, Professor Emeritus of the University of Tokyo. He became a Nobel Laureate in Physics for his pioneering contributions to astrophysics, in particular for first detecting the cosmic neutrinos that are released from supernovas. He also corroborated the supernova mechanism that is triggered by gravitational collapse, and confirmed a theory of the evolution of stars.

Dr. Murakami was born in 1936, and graduated from the Graduate School of Agriculture, Kyoto University. He is now a Professor Emeritus of Tsukuba University. His work in isolating the renin gene, the enzyme gene that causes high blood pressure, was recognized as a worldwide achievement in biotechnology. He has been the leader of the Tsukuba Advanced Research Alliance since 1994. His most popular book, “Seimei No Ango (The Cipher of Life)”, has sold one hundred thousand copies.

Mr. Tatsumura was born in 1940 and graduated from the Department of Aesthetics and Art History, Faculty of Letters, Kyoto University. He is well known for his NHK (Nihon Hoso Kyokai) documentary films. In 1976, he was awarded the Galaxy Prize for his documentary film, “Silk Road Genshi Iku.” An interview with His Holiness the Dalai Lama is featured in one of Mr. Tatsumura’s most important works, “Gaia Symphony, the Second.”